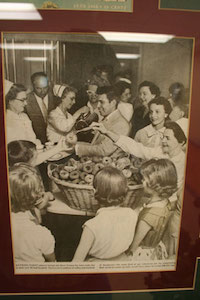 The Hospital that Coffee and Doughnuts Built

(from an article by Richard C. Davis)

Three blasts of the fire whistle. That was the signal. 10:15 a.m. Who was the first patient at the spanking new hospital? Phone calls flooded the central office, asking for the person. It was an 8 1/2-pound Texan, who brought his mother along and made the front page of the Telegram that night in 1952.

Just about every man and woman in Eastland had an investment in the hospital. It was built without a cent of government aid, built after hours - from 6:30 p.m. till midnight - with coffee and doughnuts for pay.

Every week night, as quick as they could finish supper, men went up to Hospital Hill (dedicated years before). Anywhere from 30 to 50 would show up to dig the foundation ditch and basement. Lawyers, ministers, merchants, and a young doctor, too, dug night after night.

Women were there, too, with coffee and doughnuts. Coffee by the pailful and dishpans of doughnuts, along with a few words of praise that somehow made every night a celebration.

One of the women was a timekeeper, keeping strict account of every hour until the work was over around 11 p.m. or midnight. Next day the newspaper carried names of the men and women who'd served the night before. Twice a week, Mrs. Sam Butler did a radio broadcast from Hospital Hill.

So it went on, long after the novelty wore off.

Contributions came in many forms. A Dallas industrialist, when asked for a special price on concrete blocks, told his manager: "Give those folks all the blocks they need and send one of our engineers to help lay them."

Short 12,000 feet of steel, it seemed once that work would have to stop. Next morning, trucks were unloading it on the hill!

Plumbers, electricians worked exhausting hours at night, with coffee and companionship to keep them awake. Women planned color schemes, draperies, pictures, linens, beds - thousands of hours of planning and working. And so the job somehow got done, after nine solid months of work. Months of laughter, fun horseplay and stories already grown to legends.

In seven hours, 100 cubic yards of concrete were poured. And except for the man at the mixer, not a skilled workmen among them. One night, just above freezing, 35 men put on 4,000 square feet of roof decking in a 20-mile an hour wind. You can't pay men for that. Except with coffee and doughnuts.

Eastland's hospital was approved by the American Medical Association and by state and national hospital associations. Young doctors came to look over the town. Two decided to settle.

And then, on June 8, 1953, came the grand opening, attended by 2,000 people. Every ethnic origin and every economic status in Eastland was represented that day. The building now stands as a monument to a community which laid aside social, racial and religious differences, banded together to erect a structure exemplifying the American spirit of community living.

The scope of services include Acute Medical-Surgical care, Level IV Trauma care, Obstertrics and gynecology, Ambulatory Care Services, and General Surgery. Eastland Memorial also provides rehabilitation programs that include cardiac rehab, physical therapy and wellness. All of these are fully supported by ancillary services such as laboratory, radiology, respiratory therapy and emergency medical services which include a helopad to assist in air transfers.

As healthcare needs continue to grow and medicine continues to progress, EMH will continue to expand to meet these challenges. our goal is to provide the best patient care available. We are confident that through the efforts and dedication of our staff, Eastland Memorial Hospital will continue to care for generations and continue to be "People you know, caring for people you love."